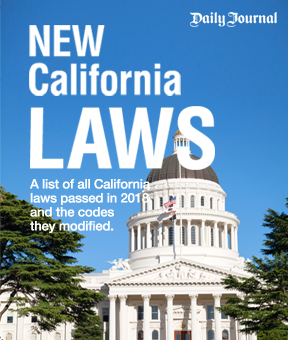 Law schools continue to fall on the wrong side of the curve
If law schools are serious about recruiting students from diverse backgrounds and those who come from low socio-economic backgrounds, the grading system as it currently stands must be the next piece to fall.
California economy surges, but future cloudy
"California continues leading the nation's economy," Newsom boasted after the December employment report was issued this month. Earlier he projected that if California were a nation, it would be close to surpassing Germany as the globe's 4th most powerful economy.
More than one million undocumented immigrants gained driver's licenses in California since new law in 2015
Since the law took effect in 2015, more than a million undocumented immigrants, out of an estimated 2 million, have received licenses, and more than 700,000 have renewed them. Besides California, 18 other states have followed suit.
College enrollment decline leads to funding changes for underperforming Cal State schools
It's a stunning reversal of fortune for the 23 campuses of the country's largest public university system, which have collectively lost 27,000 students in two years — part of a national wave of declining college enrollment.

Oil drilled in Amazon rainforest ends up in California
Much of that oil, advocates say, is shipped to California for processing. In fact, half of the crude exported from the Amazon overall goes to California, according to a report by Amazon Watch and Stand.earth, two nonprofit groups that work to protect the rainforest.
California reparations task force aims at more than dollars; seeks policies to prevent harm
"This is the meat — the actual meat — of what we're really trying to do," said Assemblymember Reggie Jones-Sawyer, a Democrat representing Los Angeles who also is a task force member.

A first-year attorney's survival guide
Lessons learned while weathering the pandemic in law school.
Would 'wealth taxes' bring big bucks or spur exodus?
California voters could pose those questions if newly introduced wealth tax legislation makes it through the Capitol, including a signature from Gov. Gavin Newsom, and appears on next year's ballot.
Gun violence should be treated as public health crisis
To decrease violence in California, research shows that we must instead invest in our communities.
A vigil, another mass shooting in California
The motive remains unclear as law enforcement continues to investigate the massacre in Monterey Park, near Los Angeles, that claimed its 11th fatality on Monday — although some reports cited recent personal disputes and emotional problems.
Asserted claims of aerial roof measurement patent invalid
The framework for distinguishing patents that claim laws of nature, natural phenomena, and abstract ideas from those that claim patent-eligible applications of those concepts is a two-step process.

US District Judge William Orrick to take senior status
When the judge takes senior status, the Northern District of California seat will move to San Jose, Orrick noted in his letter to President Joe Biden, due to the increasing volume of cases there.
To stay or not to stay – the arbitration jurisdictional split is on the docket
Coinbase sides with the majority view, lamenting in its petition that it has been forced to answer two complaints that seek to proceed as class actions and face imminent discovery
Jaywalking is now legal, but Californians still need to be cautious
Supporters have heralded the law change as a victory for pedestrians, and for people living in low-income communities of color who, statistics show, are more likely to be cited for jaywalking than people in whiter, wealthier neighborhoods.
Raising the federal debt ceiling has been the norm
The only practical solution is for Congress to promptly act to increase the debt ceiling, which it recently did with bipartisan support on three occasions during the Trump Administration, to protect the full faith and credit of the United States.
$255M class settlement with Juul Labs gets preliminary approval
The lawsuits claim the company was a major driving force behind the underage vaping epidemic.
Doctors' attorneys argue against state law limiting speech on COVID
Attorneys debated for two hours about what speech the law restrains — and how extreme that speech would have to be in order to be sanctioned.
Transit ridership falters, posing a 'fiscal cliff'
The California Air Resources Control Board has issued seemingly countless decrees, including one that would ban the sale of autos with gas- or diesel-powered engines by 2035.
School funding proposal aims to achieve equity, but does it go far enough?
Some advocates say the proposed school funding in the budget waters down the intent of the bill and will perpetuate the achievement gap for Black students.
After Monterey Park, more gun safety talk
After the massacre late Saturday night at Monterey Park's Star Ballroom Dance Studio that left 10 dead and 10 others hospitalized, on Sunday one politician after another, including President Biden, expressed sorrow and offered condolences. (An 11th person died Monday.)
Savings accounts for disabled people are opened to more of them
The change means an estimated 6 million more people, including about 1 million military veterans, will eventually qualify for the tax-favored accounts, advocates for disabled people say.

Letters of intent for commercial leases – lessons learned from the Amazon case
Non-breaching parties to a letter of intent may have a claim for costs incurred in reliance on that promise if that promise is breached.
Why is there a California Supreme Court Historical Society?
The persuasive attorney and wise jurist recognize that the historical underpinnings of a law, decision, or custom is critical to its proper application, whether in making an argument or in supporting a judicial ruling. In short, in the field of law, the past guides the future.
A veiled threat
The notion that the free expression of religion of a student group like Fellowship of Christian Athletes may threaten others is not just a myth pushed by progressives. The threat is veiled but there.
California housing shortage triggers cycle of despair
The economic laws of supply and demand mean the housing shortage results in high home prices and rents. As those costs, particularly rents, filter down to the Californians on the bottom rungs of the economic ladder, they result in California's having the highest rate of poverty of any state, 13.2%, when the cost of living is included in the calculation.
After Madera's hospital closure, could others follow?
The COVID-19 pandemic pushed the 51-year-old hospital over the brink, hospital leaders said.

Abusing the shadow docket
It again is five conservative justices advancing the conservative agenda, here with regard to immigration, in violation of clear legal rules and using the shadow docket to achieve their goals.
Unemployment insurance in crisis, needs a fix
Among the many other examples, albeit less spectacular, has been a chronic crisis in unemployment insurance, the program that's supposed to cushion the devastating effects on workers who lose their jobs and their families during the state's periodic recessions.
To reel in oil industry, California should examine its maintenance practices – not tax profits
Although founded on fairness principles, Newsom's proposed tax will do little to address the underlying root causes of the price spikes.
State COVID-19 testing sites begin to close
Sites that are operating under 50% capacity are scheduled to close before the end of January. Forty-four OptumServe sites will be shuttered this week, and 48 mobile "mini-buses" will begin closing in two weeks, according to the California Department of Public Health.
California celebrates Lunar New Year
Gov. Gavin Newsom signed a bill last year declaring Lunar New Year, which typically falls on the second new moon after the winter solstice, to be a state holiday — a way to "acknowledge the diversity and cultural significance Asian Americans bring to California," he said in his signing message.

Passing down financial values
Financial wisdom is a gift that can have lifelong rewards and last longer than a monetary gift.
Storms tell California to upgrade its plumbing
So far, only a relatively tiny amount of the immense storm runoff has found its way into storage.
How California can prepare for future floods before a megastorm hits
The future likelihood of a series of huge atmospheric rivers in California, a so-called ARk storm scenario, seems to be a certainty.

Californians' patience on homelessness wears thin
Gov. Gavin Newsom acknowledged the growing resentment as he introduced his new state budget last week. "People have just had it," he told reporters. "They want the encampments cleaned up."
UC housing problem persists for graduate students
Of the roughly 113,000 beds occupied by university students, just around 17,500 are for graduate students, according to fall 2022 data the UC Office of the President shared with CalMatters.
Race to zero: Can California's power grid handle a 15-fold increase in electric cars?
State officials claim that the 12.5 million electric vehicles expected on California's roads in 2035 will not strain the grid.
There's nothing clean about offshore wind development unless California tribes are involved
These shortsighted actions are also an assault on our sacred connection to the land, which is fundamental to who we are as Native people.
Trademark and copyright cases to watch in 2023
Each of these cases could significantly impact IP law. For that reason, we will keep a close eye, and I will likely write about each of these cases as they continue to develop.

Be kind to your reader
Writing clearly requires getting out of your shell as a writer, and thinking about your reader.
Scramble begins for Feinstein's US Senate seat
Feinstein, who will be 90 in June, has not said whether she'll be seeking another term next year, but recently widowed, very unpopular with the dominant progressive wing of the Democratic Party, and plagued by accounts of cognitive dissonance, she is likely to retire.
Why you should file taxes even if you don't owe any
One of the main ways California helps people financially — and redistributes wealth — is by passing money through the tax system. It's not just one-time pandemic payments; there are also yearly payments, called refundable tax credits, that provide thousands of dollars to lower-income people through the tax system.
New LA mayor on homelessness, California housing crisis
She spoke with L.A. Times reporters Liam Dillon and Ben Oreskes about the California housing crisis, the homeless population in Los Angeles and the state, and gave her opinion on related topics like gentrification and Proposition 13.

How will California deal with a big budget deficit?
Gov. Gavin Newsom will soon reveal a proposed budget for the 2023-24 fiscal year that begins July 1, and it's likely to greatly differ from the 2022-23 version he and the Legislature adopted just six months ago.
A new year, but California's old crises still abound
Despite a fairly wet winter – so far – California is still coping with a multi-year drought that's devastating the nation's most productive agricultural industry, the electrical grid struggles to meet demand, public school students are struggling with learning losses from COVID-19 school shutdowns, and the state's chronic housing shortage underlies the nation's highest rates of poverty and homelessness.
How new Title IX rules could affect state's transgender and nonbinary students
President Joe Biden's administration aims to protect students who identify as transgender and nonbinary from discrimination under new rules proposed in June and now making their way through the Education Department's lengthy rulemaking process. If finalized, the changes to Title IX, the 50-year-old civil rights law, would clarify that its ban on discrimination on the basis of sex extends to sexual orientation and gender identity.

Border scramble: Why California isn't financially ready for Title 42 to end
The situation, and its use as a political backdrop, has prompted local officials to ask what state resources will be available next year with California facing a potential budget shortfall and the possibility that Title 42 will end.
California's takes steps toward pay equity
Employers must provide current employees with their pay scales upon request. Although applicants and employees likely welcome the enactment of Senate Bill 1162, or the "Pay Transparency Act," employers face some new responsibilities.